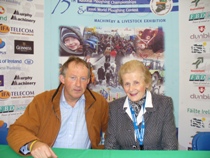 Minister Tom Parlon with Anna May McHugh of the National Ploughing Championships.

As always, the Progressive Democrats tent (Row T Stand 368) was a popular destination for many revellers who wanted to rest their legs, drink some tea and shoot the breeze with our Public Representatives and members who were manning the stand. 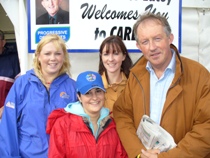 On Friday 29th October, the Tánaiste and Party Leader Michael McDowell was on hand to launch the Party’s policy document on Rural Planning. (see press room).

In his speech at the closing ceremony of the Championships on Friday Minister of State at the Department of Finance and Party President Tom Parlon T.D. congratulated all involved in the organisation of the event.

A huge thank you must go to all who helped out on the stand over the four days and we look forward to another successful display at the Ploughing Championships in Tullamore next year.